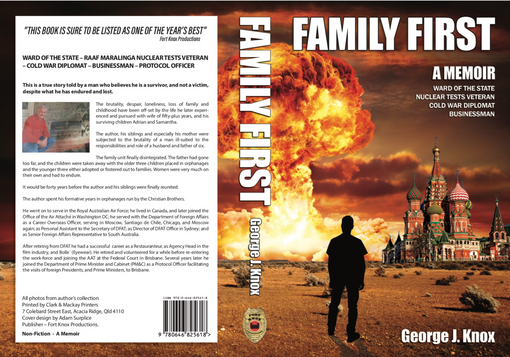 The life story of Camera 83 is now available. Free Postage and your all Copies are signed by Camera 83.

The Life story of my Dad.

This is a true story told by a man who believes he is a survivor, and not a victim, despite what he has endured and lost.

The brutality, despair, loneliness, loss of family and childhood have been off-set by the life he later experienced and pursued with wife of fifty-plus years, and his surviving children Adrian and Samantha.

The author, his siblings and especially his mother were subjected to the brutality of a man ill-suited to the responsibilities and role of a husband and father of six.

The family unit finally disintegrated. The father had gone too far, and the children were taken away with the older three children placed in orphanages and the younger three either adopted or fostered out to families. Women were very much on their own and had to endure.

It would be forty years before the author and his siblings were finally reunited.

The author spent his formative years in orphanages run by the Christian Brothers.

He went on to serve in the Royal Australian Air Force; he lived in Canada, and later joined the Office of the Air Attaché in Washington DC; he served with the Department of Foreign Affairs as a Career Overseas Officer, serving in Moscow, Santiago de Chile, Chicago, and Moscow again; as Personal Assistant to the Secretary of DFAT; as Director of DFAT Office in Sydney; and as Senior Foreign Affairs Representative to South Australia.

After retiring from DFAT he had a successful  career as a Restauranteur and Agency Head in the film industry, and Bolle` (Eyewear). He retired and volunteered for a while before joining the AAT at the Federal Court in Brisbane. Several years later he joined both the Department of Prime Minister and Cabinet (PM&C) and DFAT as a Protocol Officer facilitating the visits of foreign Presidents, Prime Ministers, and Foreign Ministers to Brisbane.